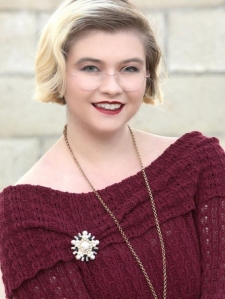 As an aspiring music historian & musicologist, her main area of study is early jazz history (from its origins to early bebop) with a particular focus on jazz in Chicago during the 1920s-early 1930s and early jazz in Southern California. Aside from jazz, her other areas of study include folk music traditions and popular music styles in America and abroad, musical accompaniment for silent films, and art music of the late 19th and early 20th centuries. Missy is also well-versed in topics regarding the local history of various cities in Riverside County, CA, early Hollywood history, and 20th century U.S. history & culture.

As a vocalist of jazz, classical, and popular music, Missy has extensive experience in both choral and solo performance. She has been involved in various choirs throughout her school career, including holding a year-long position as the alto section leader for Mt. San Jacinto College’s Menifee Campus Singers. She studied voice as an undergraduate student and has performed as a soloist at numerous choral concerts and student showcases, as well as for elderly residents in senior homes.

Her blog, The Melodic Word, is home to critical listening and to thoughts and observations about all aspects of music and music history, and includes music reviews, analyses, essays, playlists, and the like.